Connect homes (dull-colored squares) to corresponding-color businesses (brighter squares) with roads. If a path is available from a given home to the business of the corresponding color, cars (circles) will generate at the homes and travel there. You (the player) earn money each time a car reaches its destination; which, in turn, allows you to pay for new roads and maintenance on existing roads. Though this gameplay mechanic is not particularly realistic, it can be thought of as an abstraction of taxes from workers and businesses feeding back into public works.

As you try to connect more homes to businesses, your roads will likely intersect and/or provide paths for lots of different cars moving between various homes and businesses. Also, obstacles (dark grey squares, representing other buildings in the city) will appear; roads may not be placed on obstacles. In general, designing an efficient grid is key to this game. To help with this, various stoplight types and color-coded gates may be placed on the roads (please see a description of these under the "Controls" section).

The game measures efficiency of your traffic grid via a metric called flow ratio. An efficient traffic grid (i.e. having a flow ratio near 100%) will allow you to directly earn more money; also, the flow ratio directly affects how likely new homes and businesses will spawn (who would want to develop in a congested, poorly managed city?).

TrafficWorlds (like my previous game ĐiệnWorlds) has no definite end. See how many weeks you can maintain an efficient grid and make money; the game is meant for players to explore and experiment with strategies to see what works best. If you get stuck, just start over ("Regenerate" at the main menu) - the game doesn't take particularly long to "mature."

At the main menu (accessible by pressing ESC), you can save/load your game (the save file is stored locally), or regenerate the board (which starts over with a newly randomized configuration).

While it is not necessary to understand every detail of the underlying simulation, having a basic understanding of some topics might help with making an optimal grid.

First and foremost, nothing in the game acts on diagonals. Cars will only move in the four cardinal directions, and roads should be constructed to produce paths accordingly.

A car will begin its journey with a path (if there is no available path from a given home to the corresponding business, cars will not spawn). Spawned cars' paths may be temporarily have other cars or red stoplights in the way (but not color-gates). The selected path will always be no longer (in number of adjacent squares) than any other possible paths.

With a path set, the car will set an internal timer to 16 frames; when this timer hits zero, the car will move to the first square on its path (but only if the adjacent square is unoccupied by a car, and isn't blocked by a "red" stoplight or a color-gate of a different color than the given car's color). A successful move will trigger a new timer of 14 frames; whereas if the car could not move, a timer of 16 frames is set again. Any time a car successfully moves, the next timer is set for two fewer frames than the previous timer was set (with a minimum of 2 frames for the set timer), while a blocked car's timer will always set to 16. Additionally, a car's timer will be set to 16 if it enters a non-stoplight square that is adjacent to at least one other car (this mechanic simulates "stop-sign" behavior at intersections where stoplights are not placed). This "timer" mechanic is a reasonable approximation to motion-by-acceleration (we invite the player to work this out as an exercise).

Within each frame of the game, the priority in which cars are given to move is determined randomly, though all cars will have a chance to move in the given frame. Because of this, two cars cannot enter the same square simultaneously.

If a car was stopped (i.e. its timer was set to 16), yet an adjacent square opens up, there is a chance that it will try to re-calculate a path. A path calculated at this state must not have any other stopped cars in the way. Hence, cars may try to circumvent a jam if such a path exists.

In this section, we discuss some money-related and chance-based aspects of the game.

I would like to encourage players to experiment and discover strategies on their own (as the dev, I don't even yet know what kinds of layouts yield the best results). Still, there are some basic hints that might help out new players.

TrafficWorlds was created with Game Maker: Studio by myself (Theta Games). All sound effects are by myself, along with the soundtrack piece "Traffic Melody and Variations." This piece can be found at the following places:

A download link is available (near the bottom of the page) for users who might want a stand-alone Windows executable. Make sure you unzip the archive before playing.

Have fun, and thanks for playing!

I've played much and found some issiues:

1. Whole path is set when car starts. If we change roads during it's journey it will stop and mostly will stuck. Sometimes it regenerates path but mostly stay at position. If we add some roads near - it may try change path. I need to create 2 separate paths (new and old) and wait if all will drive by new path, than can delete old one.

It should regenerate path if cannot move because there is no road (from calculated path).

Thanks for the comments.  Unfortunately, it kills performance if stuck cars constantly check for new paths.  I tried to strike a good balance between quickly-adapting AI and performance.

Also, one might argue that quickly adapting to new routes is somewhat unrealistic.  Drivers that have set out to work already have their routes in mind (or programmed into GPS).  Yes, people certainly take other routes when stuck in traffic - but they usually don't do it instantly.

I haven't played so much time. Right, it may kill the performance, but maybe it should check new route only if car stuck - this means, that not moving for some time, but have other free path/road to go. So it will check for path for first stuck car and move it, then next time for next one. The last one - will wait, but after some time all cars can go. Additional one or few cars (if many tracks changes for last day) won't need additional performance. Now it is impossible to check new solutions without stopping the source point.

This reminds me of mini metro. I really like the game

Thank you! I've played Mini Metro as well; I like it.

Three-way traffic lights would be nice too.

That might work well; it's a possibility in the future as well.

Could you add one-way roads? (Love the game, btw - I've spent way too many hours playing it!)

I'm glad you like it, thanks! One-way roads is a little hard with the current car pathfinding, unfortunately. If I ever revamp that aspect, it's a possibility, though.

Could you make a speedup feature?

I think I could give it a go.

The fullscreen button is more of an itch.io thing, but I'll see if I can do anything about it.

Placing roads would work nicely with touchscreen, but I'd have to rethink all the the other controls (e.g. SPACE to pause, ctrl-clicking, etc.) to make everything else work on such a device. Maybe in the future, though.

Your pathfinding implementation doesn't properly check whether a stoplight is never going to be green when approaching from a certain side, as demonstrated in this screenshot: https://i.imgur.com/xvqKPSY.png

Right, the pathfinding actually ignores stoplights. This is because it's built on squares either being "on" or "off," while a stoplight adds a directional aspect to it. If I generalize the pathfinding to allow for directed graphs (it would be a serious generalization), then it could allow for permanently blocked stoplights and even one-way streets.

Turning undirected Dijkstra/A* to directed should only be a few lines. Especially in this case it's feasible to just hack in a specific check for permanently blocked stoplights and skip if true.

This is certainly something I would consider generalizing in the future.

I've implemented a change (v1.1.2) that should address this somewhat. 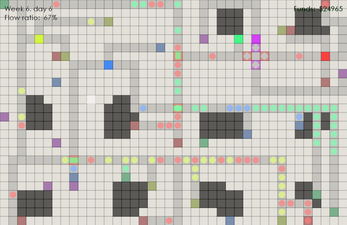 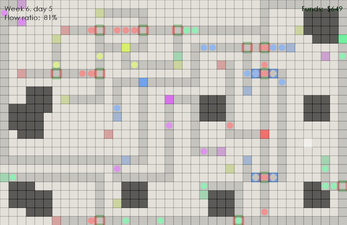